“just setting up my twttr”

With these 5 words, one of the largest, most influential companies/apps/websites/trend setter/communication service was born. The tweet belonged to Jack Dorsey, Twitter co-founder, and was tweeted on March 21st, 2006. What started as a simple messaging service has now become a multi-billion dollar corporation that is used by pretty much everyone, from celebrities and politicians to businesses and just everyday guys and gals.

To say that Twitter, and tweets in general, is influential is an understatement: tweets have managed to get Presidents elected, corporations toppled, created celebrities out of thin air, and have managed to set the tone for entire cultures. As one of the pioneers of social media, Twitter has now become as ubiquitous to everyday life as the industry it helped create.

While Twitter has become almost-ubiquitous with life in the 21st century, there are some facts about the site/app that some people might not know about. Here are some Twitter trivia that we think you might enjoy. 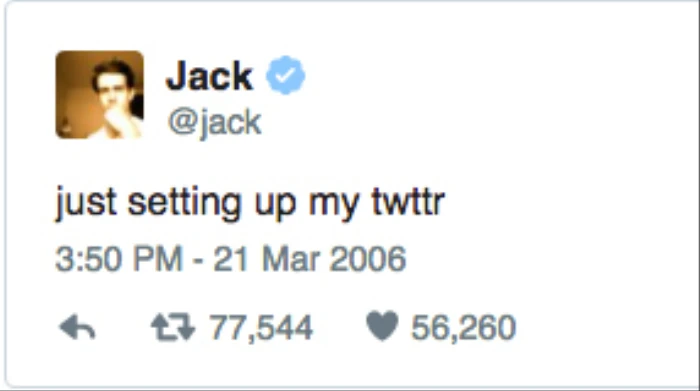 This was the very first tweet ever sent out into the Twitterverse and was written into the history of Twitter by Twitter co-founder Jack Dorsey. If you’re wondering why he misspelled his own website’s name, he didn’t: Twitter was originally known as “twttr”, an attempt to capitalize on the SMS brevity trend of the mid-’00s (think: Flickr, N 2gether Now, you get it) and to give the site a more “youthful” vibe.

Thankfully, it didn’t turn out that way: prior to launch, Twitter founders enlisted the help of Swedish graphic designer Linda Gavin to help create a logo for their microblogging site. Linda was the one who came up with the now-iconic, sky-blue logo that we all know and love today.

A lot of sites have come up with possible acronyms for the word, but in reality, the word ‘twitter’ was chosen because of the ‘short bursts of inconsequential information’ published on the site, which the founders likened to the tweeting of birds (which, coincidentally, also lead to its logo).

But even before it was “twttr”, the founders weren’t just struggling to find a name (Smssy was one front-runner, unfortunately), they were struggling to create a new site. Prior to the creation of Twitter as we know it today, the founders worked on a website where people could publish short audio clips and functioned as a podcast directory. The site was called Odeo, and while it could have been great (a SoundCloud precursor, perhaps?), understand that 2006 was a very different time: investors didn’t quite understand the value of publishing audio clips online, and, coupled with Odeo’s lack of growth, decided to slash funding. Some of the Odeo founders decided they needed a new business model, and after a full 24-hour hackathon where they squeezed out as many ideas as they could, they hit on the idea of creating a microblogging site that limited their users to 140 characters. And thus, Twitter was born.

What’s In a Font?

A lot of people wonder what font Twitter uses, and it’s simple: Helvetica Neue. If you’re wondering where you’ve seen this font before, it’s because this offshoot of the Helvetica typeface family is used pretty much everywhere, from flyers and ads to TV commercials and text graphics. Twitter chose Helvetica Neue for its primary web font because of its clean and easy-to-read design.

But it wasn’t always like this: in 2014, Twitter briefly switched to the Gotham Narrow ScreenSmart font for a typeface that, they argue, is more optimized for smaller screens. Unfortunately, Twitter users absolutely hated it, not to mention that Gotham didn’t come with a specific type set for languages like Arabic and Chinese. And so, in less than 4 months, Twitter switched back to Helvetica Neue, and we can now all forget the GothamGate that almost broke the Twitterverse.

With more than 330 million active users in the first quarter of 2019 alone, it’s safe to say that there’s a lot of people on Twitter. And out of the total amount of users in the site, these accounts are the ones with the most followers:

Katy Perry tops the list with over 107.3 million followers, accounting for 1/3rd of all monthly active users. Most of the singer/songwriter’s tweets are branded content, with the occasional tweet about upcoming projects and concerts.

Hail to the Former Chief! Barack Obama comes in at number two, with 105.9 million followers as of 2020. Although most of the Former President’s tweets are, understandably, political, he also has multiple ‘fun’ posts that reflect 44’s well-beloved sense of humor.

Love him or hate him, Justin Bieber is the third most-followed account in Twitter, with 105.3 million active users following him (just 300,000 short of Obama!). Unlike most celebrities, Bieber runs all of his social media accounts by himself, with his twitter being home to personal opinions, endorsements, and updates on upcoming concerts.

Bird is the Word

The now-iconic Twitter bird was first unveiled in 2009, and was an edited version of an existing piece of clip art. This version of the Twitter bird was called Larry and was named after Boston Celtic’s legend Larry Bird. However, in 2012, former Twitter director Douglas Bowman redesigned the Twitter logo, dropping the word itself and adopting a sleeker, simpler, and ultimately more remarkable, bluebird as the logo.

Twitter also uses another animal for a logo: the FailWhale. FailWhale is used whenever Twitter is down, and while it was meant to be a temporary placeholder, Twitter users loved it so much that the company decided to keep it on as a permanent 404 harbinger.

On January 15, 2009, a US Airways flight crashed into the Hudson River after birds crashed into the engine causing them to fail. Despite the odds, veteran pilot Captain Chesley B. Sullenberger managed to pull off ‘the most successful ditching in aviation history”, saving the lives of all 155 people on board. It’s been dubbed the “Miracle on the Hudson”, and there’s a very big chance that you heard about it first on Twitter.

In fact, the first photo of the incident was posted on Twitter, when a Twitter user on a nearby boat snapped shots and posted it on the site. News outlets picked up most of their updates from there, and from then on, Twitter became a hotbed for news updates and other events.