Twitter is arguably one of those social media sites that are so popular and useful that you can’t imagine a world without it. Twitter allows you to see and reply to what your favorite celebs are saying (though whether or not they do read your Tweets to them is another thing entirely) and see what’s trending based on what people are talking about.

But if you were on Twitter prior to 2013, you might understand why many thought it was bound to fail. At times, Twitter would go over capacity. So, when you tried to access the website, you wouldn’t be taken to your feed to see the latest Tweets from the accounts you followed. Instead, you’d see a page that says “Twitter is over capacity.” and you’d have no choice but to keep refreshing the page and wait until you got in. 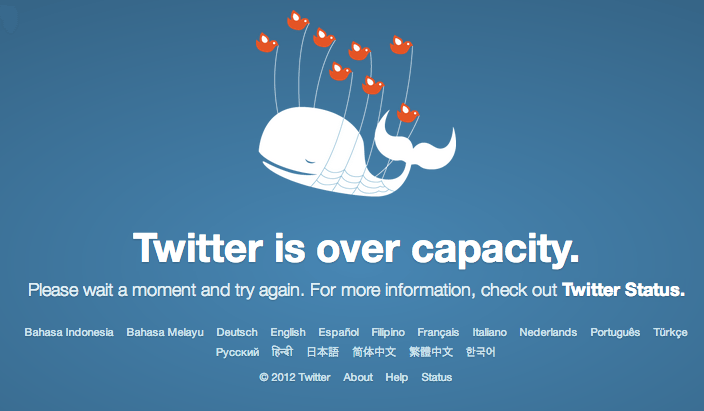 And this wasn’t a one-time thing. Prior to 2013, it would happen very frequently, especially when there was a huge event that got a lot of people talking. Eventually, Twitter users got acquainted with this page very often that the whale was given a name of its own: Fail Whale.

If you joined Twitter after 2013, you might not have heard of that iconic Twitter character. Don’t feel bad, though. The fact that you didn’t get to meet Fail Whale meant that you were at a period where Twitter was running as its founders wanted it to be. Here’s why.

Twitter was created in 2006 as a micro-blogging platform. Back then, it was likely that Twitter only had the server capacity for a few million users Tweeting at the same time. For those unaware of how platforms like Facebook and Twitter work, a single social media website runs on many servers, not just one. Here’s a fairly simplified explanation of how it works.

Every time a user visits Twitter, they are connected to the least busy server. Because Twitter has to pay more for more servers to run by the hour, when there aren’t that many users to justify a certain amount of servers, they shut some of them down. On a good day, these server shutdowns do not affect anyone’s Twitter experience because the load is balanced between the existing servers.

Sometimes, however, Twitter can get their estimates wrong. They might think that there will only be a few thousand Tweets per second, but then somewhere in a different country, tens of thousands of Twitter users are online to Tweet out their concerns over a political issue that just took place. Or, in another country, people are live-tweeting about the series finale of a beloved TV show no one in Twitter HQ knew about.

Because Twitter failed to take note of these actions that could spike the average Tweet count per second, there aren’t enough online servers to accommodate the large influx of active users. And when all running servers have reached their limit and there are no servers to accommodate the additional active users, Twitter becomes overcapacity. Thus, you’ll get this message: “Twitter is over capacity.”

Users complained about the overcapacity as early as 2007 when the social network would experience downtime whenever Twitter could not accommodate the influx of users during noteworthy events. In 2008, for example, Twitter crashed during the late Steve Jobs’ keynote speech at MacWorld.

Twitter’s overcapacity got so severe that it was one of the reasons people (including me) left Twitter for a while. I liked Twitter’s micro-blogging features, even if, back then, it only allowed for 140 characters and didn’t have the Twitter thread feature yet. However, it always irritated me when I couldn’t access Twitter to read and write about a significant event as it was happening. And at the same time, Facebook was just taking off. And while it didn’t have the same real-time feel as it does now, it was at least reliable enough for me to share my thoughts.

And this is why artist Yiying Lu’s iStockPhoto.com image of a whale being carried by eight orange birds came to be known as Fail Whale. Each time Twitter was down, Lu’s image was what people saw. However, co-founder Biz Stone saw the icon and thought it was a cute and symbolic photo to see whenever Twitter was down. Thus, Fail Whale was often linked to Twitter’s downtime. This would be the very reason why, in Twitter’s eyes, Fail Whale was doomed to disappear from the internet eventually.

The End of Fail Whale

Towards the end of 2013, however, old Twitter users began to notice Fail Whale making an appearance on their browsers less and less frequently. Even with notable events causing more people on average to Tweet every second, Twitter had built and established its servers so that it would always be within capacity at any given second. Eventually, Fail Whale stopped showing up altogether. Those who have seen Fail Whale did not miss it and moved on, and those who were new to Twitter would never have to know Fail Whale or what he stood for.

The huge disappearance was due to Twitter improving their infrastructure. While Fail Whale was an iconic symbol on the social media platform, it symbolized a failure in their system that Twitter’s teams worked hard to remove. And by making sure Twitter never went over capacity again, that meant there would be no reason to see Fail Whale.

Now the poor Fail Whale is in Internet Icon Heaven, having a whale of time next to the AOL running man and Clippit from Microsoft Word.

But look at it this way: Fail Whale had to die for Twitter to go on to become one of the top social media platforms in the world. Looking back, the Twitter I knew prior to 2013 could not support the 126 million daily active users Twitter has today. Fail-Whale-era Twitter would be over capacity on that alone, forget any major event that gets people talking.